So over the Christmas period I continued with my series of bra paintings. These were slightly different to the first painting. Firstly, they were all A3, and secondly, they were all painted with the same background; the wallpaper in my hallway.

Due to the lack of light and room to set up an easel I once again had to rely on photographs to complete these paintings. I have, over the years, managed to find a way to combat the flattened perspective of photography.

I built the paintings up in layers. I started with masking off stripes in brown, then I used a damp cloth to wipe over a cream mix in layers. I use a damp cloth when I don’t want the paint strokes to show. It gives a much more even look, but can take more layers to get the desired look because you are essentially rubbing some of the paint off as you go.

These paintings below show the work in progress shots of building up the background before painting the bras. I do this rather than leave an un-painted section for the bra because, as the bra material is transparent in places, it was important that the background colour was visible through the material. 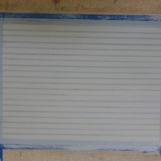 Then I began to set the light source, painting extra pale cream layers in the top left corner, while adding extra layers of brown in the other three quarters of the painting. I again used the damp cloth to do this to give a smoother appearance which was easier to blend the colours where they met so there were no harsh edges. I painted three paintings at the same time, to keep a continuity of colour.

I painted as much of the shadows and the coat hangers as possible. It is easier to do this first rather than try to cut them in later. 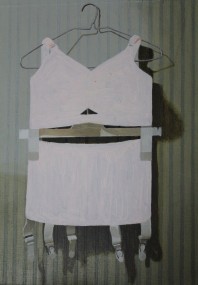 Creating these paintings was almost like creating the bras themselves. I had to work on a layer at a time. Building up the intensity with each layer. 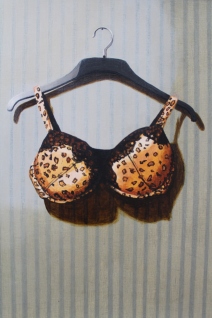 With the red bullet bra I realised that there were areas where the red wasn’t vivid enough, it didn’t pop and the only way to remedy this was to paint white over the top of the red I had already painted, then re-apply the lighter, brighter red over the top of that. This really helped to give the bra a more realistic, three-dimensional appearance and made the fabric shine. 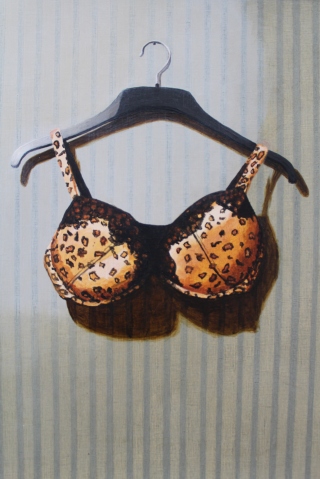 The two finished paintings. These have been my most challenging paintings to date, but now I have to go further and do better than I have so far! Can I get better or have I peaked too soon? I guess the next few months will reveal all. 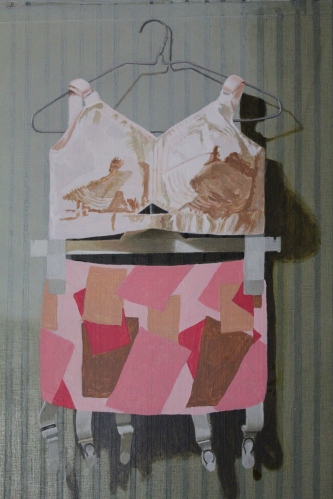 These are the last two work-in-progress shots for this painting. Unfortunately I ran out of time in which to finish it before hand-in day, so had to leave it unfinished. I do intend to finish it, but it will have to take a back seat now while I work like a Trojan to complete my new paintings for my final graduation exhibition. This is where it all starts to get serious!!